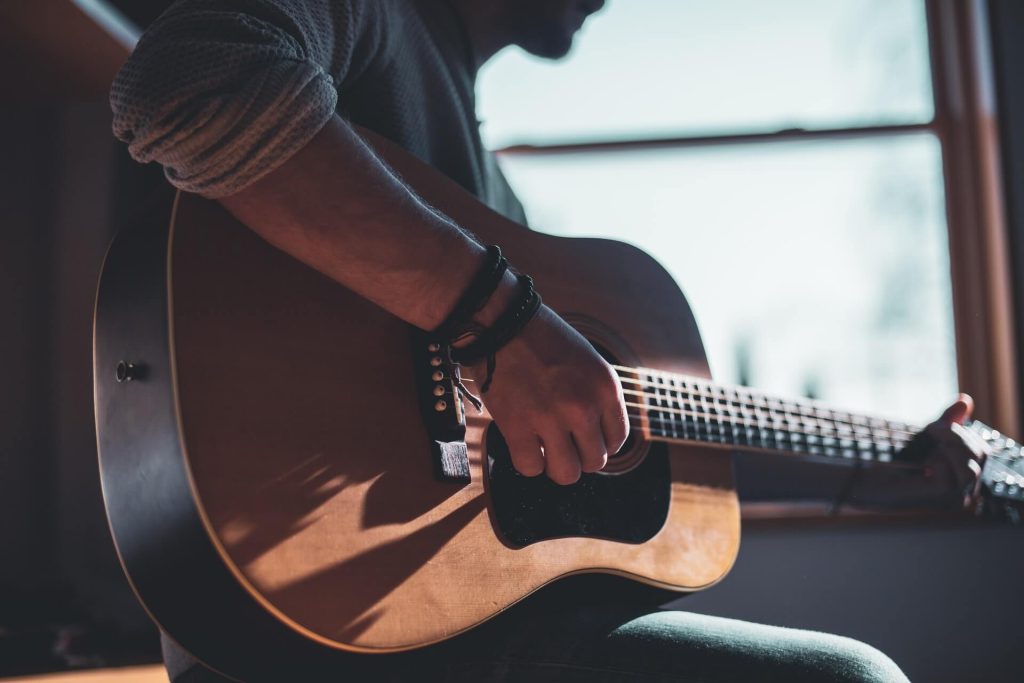 How Does Guitar Works?

Hendrix, Cobain and Page. They can all shred, but how exactly do the iconic
contraptions in their hands produce notes, rhythm, melody and music.

When you pluck a guitar string, you create a vibration called a standing wave. Some points on the string, called nodes, don’t move at all, while other points, anti-nodes, oscillate back and forth.

The vibration translates through the neck and bridge to the guitar’s body, where the thin and flexible wood vibrates, jostling the surrounding air molecules together and apart. These sequential compressions create sound waves, and the ones inside the guitar mostly escape through the hole. They eventually propagate to your ear, which translates them into electrical impulses that your brain interprets as sound.

The length, the tension, the density and the thickness.

Typical guitar strings are all the same length, and have similar tension, but vary in thickness and density. Thicker strings vibrate more slowly, producing lower notes. Each time you pluck a string, you actually create several standing waves.

There’s the first fundamental wave, which determines the pitch of the note, but there are also waves called overtones, whose frequencies are multiples of the first one.

All these standing waves combine to form a complex wave with a rich sound. Changing the way you pluck the string affects which overtones you get. If you pluck it near the middle, you get mainly the fundamental and the odd multiple overtones, which have anti-nodes in the middle of the string.

If you pluck it near the bridge, you get mainly even multiple overtones and a twangier sound. The familiar Western scale is based on the overtone series of a vibrating string. When we hear one note played with another that has exactly twice its frequency, its first overtone, they sound so harmonious that we assign them the same letter, and define the difference between them as an octave.

The rest of the scale is squeezed into that octave divided into twelve half steps whose frequency is each 2^(1/12) higher than the one before. That factor determines the fret spacing.

Each fret divides the string’s remaining length by 2^(1/12), making the frequencies increase by half steps. Fretless instruments, like violins, make it easier to produce the infinite frequencies between each note, but add to the challenge of playing intune.

The number of strings and their tuning are custom tailored to the chords we like to play and the physiology of our hands. Guitar shapes and materials can also vary, and both change the nature and sound of the vibrations.

Playing two or more strings at the same time allows you to create new wave patterns like chords and other sound effects. For example, when you play two notes whose frequencies are close together, they add together to create a sound wave whose amplitude rises and falls, producing a throbbing effect, which guitarists call the beats.

And electric guitars give you even more to play with. The vibrations still start in the strings, but then they’re translated into electrical signals by pickups and transmitted to speakers that create the sound waves.

Between the pickups and speakers, it’s possible to process the wave in various ways, to create effects like distortion, overdrive, wah-wah, delay and flanger. And lest you think that the physics of music is only useful for entertainment, consider this.

Some physicists think that everything in the universe is created by the harmonic series of very tiny, very tense strings.

So might our entire reality be the extended solo of some cosmic Jimi Hendrix?

Clearly, there’s a lot more to strings than meets the ear.

Who Invented Karaoke? American, Japanese or Filipino?
Mozart’s Magical Flute
What Is Squillo In Classical Singing?
Music Is A Language Too
Why Do Birds Sing?
Mysteries About Basic Cognition Of A Song
Music And Creativity In Ancient Times
Type Of Rhythm That You Can See
Extreme Noise Can Damage Our Ear?
How Does Music Works?
Menu