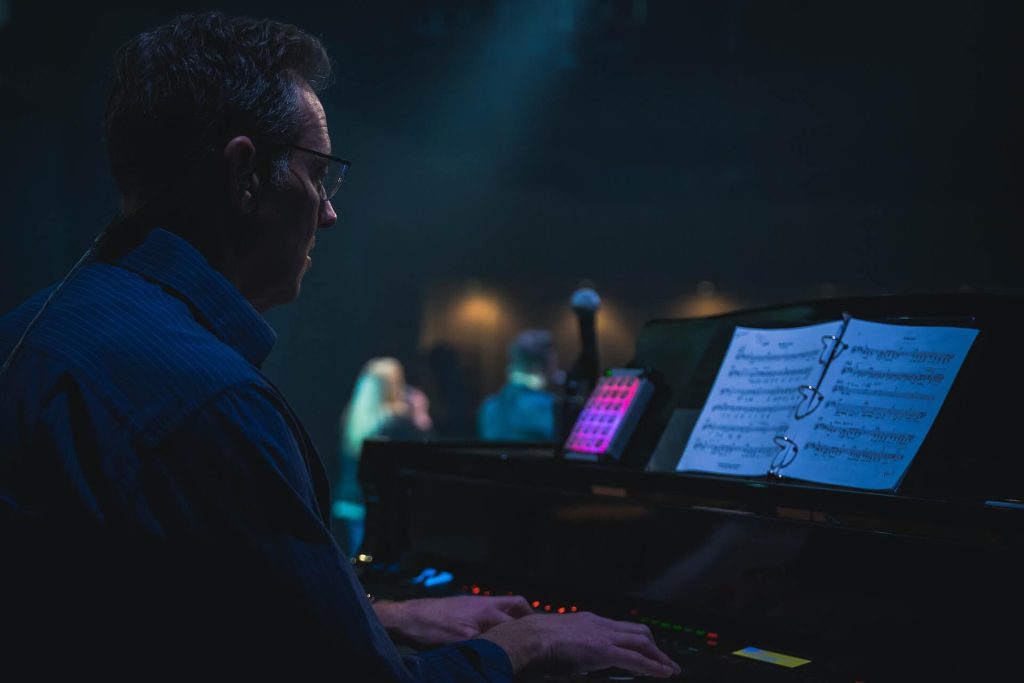 How To Read Music

When we watch a film or a play, we know that the actors probably learned
their lines from a script, which essentially tells them what to say and when to say it. A piece of written music operates on exactly the same principle.

In a very basic sense, it tells a performer what to play and when to play it. Aesthetically speaking, there’s a world of difference between, say, Beethoven and Justin Bieber, but both artists have used the same building blocks
to create their music:

Notes. And although the end result can sound quite complicated, the logic behind musical notes is actually pretty straightforward.

Let’s take a look at the foundational elements to music notation and how they interact to create a work of art.

Music is written on five parallel lines that go across the page.

These five lines are called a staff, and a staff operates on two axes:

Let’s start with pitch. To help us out, we’re going to use a piano, but this system works for pretty much any instrument you can think of.

In the Western music tradition, pitches are named after the first seven letters of the alphabet, A, B, C, D, E, F, and G.

After that, the cycle repeats itself:

But how do these pitches get their names?

Well, for example, if you played an F and then played another F, higher or lower on the piano, you’d notice that they sound pretty similar compared to, say, a B.

Going back to the staff, every line and every space between two lines represents a separate pitch.

If we put a note on one of these lines or one of these spaces, we’re telling a performer to play that pitch. The higher up on the staff a note is placed, the higher the pitch.

But there are obviously many, many more pitches than the nine that these
lines and spaces gives us.

A grand piano, for example, can play 88 separate notes. So how do we condense
88 notes onto a single staff? We use something called a clef, a weird-looking figure placed at the beginning of the staff, which acts like a reference point, telling you that a particular line or space corresponds to a specific note on your instrument.

If we want to play notes that aren’t on the staff, we kind of cheat and draw extra little lines called ledger lines and place the notes on them.

If we have to draw so many ledger lines that it gets confusing, then we need to change to a different clef. As for telling a performer when to play the notes, two main elements control this:

The beat and the rhythm. The beat of a piece of music is, by itself, kind of boring.

Notice that it doesn’t change, it just plugs along quite happily. It can go slow or fast or whatever you like, really. The point is that just
like the second hand on a clock divides one minute into sixty seconds, with each second just as long as every other second, the beat divides a piece of music into little fragments of time that are all the same length:

Beats. With a steady beat as a foundation, we can add rhythm to our pitches, and that’s when music really starts to happen.

This is a quarter note. It’s the most basic unit of rhythm, and it’s worth one beat.

This is a half note, and it’s worth two beats. This whole note here is worth four beats, and these little guys are eighth notes, worth half a beat each.

You might have noticed that across the length of a staff, there are little lines dividing it into small sections. These are bar lines and we refer to each section as a bar. At the beginning of a piece of music, just after the clef, is something called the time signature, which tells a performer how many beats are in each bar.

One corresponds to a whole note, two to a half note, four to a quarter note, and eight to an eighth note, and so on.

So this time signature here tells us that there are four quarter notes in each bar,

But like I said before, if we just stick to the beat, it gets kind of boring, so we’ll replace some quarter notes with different rhythms.

So, what does our musical creation sound like? Eh, sounds okay, but maybe
a bit thin, right?

Let’s add another instrument with its own pitch and rhythm. Now it’s sounding like music.

Sure, it takes some practice to get used to reading it quickly and playing what we see on our instrument, but, with a bit of time and patience, you could be the next Beethoven or Justin Bieber.

What do you think about reading a music?