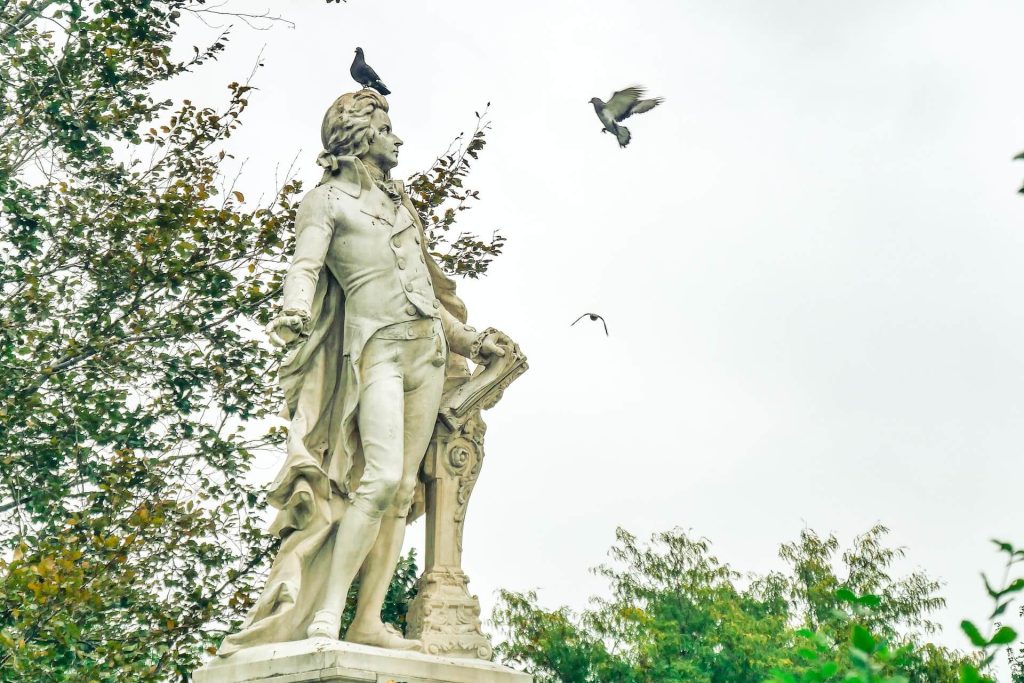 A boy named Prince Tamino runs through a dark wood pursued by a dragon. Just as it rears up to devour him, three mysterious ladies appear and slay the dragon with their fierce battle cry. So begins Wolfgang Amadeus Mozart’s “Die Zauberflöte,” or “The Magic Flute.”

This fantasy singspiel, a type of folk opera with music and dialogue, premiered in 1791 in Vienna. Though it may seem like a childish fairytale, this intricate opera is full of subversive symbolism, and it’s now regarded as one of the most
influential operas in history.

Tamino’s run in with the dragon is only the start of his journey. The three women summon their leader, the Queen of the Night. She, in turn, sends Tamino on a quest to rescue her daughter Pamina from the evil sorcerer, Sarastro. And to help him on his journey, she gives him the titular magic flute.

Tamino eventually finds Pamina at Sarastro’s temple, but behind enemy lines, Tamino and Pamina learn that they’re on the wrong side. The Queen of Night actually wants to plunge the world into darkness.

Everything Tamino thought he knew was wrong, filling him with doubt and confusion. So, a new quest begins for Tamino and Pamina. They must pass three trials of wisdom, and only then can the day vanquish the night. Helped by the flute’s magic power, the two youths overcome these trials and the Queen’s attempts to sabotage them.

They’re finally initiated into the temple having restored balance to the kingdom. Many elements in this peculiar fairytale were inspired by Mozart’s involvement
in Freemasonry, a network of fraternal organizations throughout Europe.

Much of their history, symbolism, and ritual came from the Middle Ages. But the Freemasons of Mozart’s time were also influenced by 18th century European ideals – rationalism, humanism, and skepticism towards traditional authorities, like monarchy and the church.

The symbols of Freemasonry and these ideals of the Enlightenment are found throughout the opera. If this sounds like a conspiracy theory, that’s because it sort of was at the time, but it’s now taken quite seriously and has been the subject of considerable scholarly publication.

For example, some Mozart scholars believe the Queen of the Night symbolizes Maria Theresa, the Empress of the Holy Roman Empire who opposed Freemasonry and banned it in Austria. While there continues to be debate
as to the specific meaning, interpretation, and location of these masonic references, scholars agree that they’re there and are fully intentional.

One of these symbols is the number three, which represented balance and order to Freemasons. Now the number three is, of course, easy to find in any work of storytelling, but it’s particularly prominent in “The Magic Flute”: three trials, three ladies, three spirits, and three doors, much of the music is written in E-flat major, which has three flats in its key signature, and historically, masonic rituals began with three knocks.

The opera references them by opening with three majestic chords complete with dramatic pauses. Those chords, which reoccur throughout the opera, serve another purpose. They capture the dramatic arc of the opera in miniature. The first chord, E-flat major, is in its most natural root position, simple and unadorned.

It echoes the child-like Prince Tamino, who, in his naiveté, accepts everything the Queen and her ladies say without question. The second chord is C minor, a sour sonority that mirrors Tamino’s sadness and doubt in the middle of the opera.

That’s when his world and notions of good and evil get turned on their heads. And good and evil are just two of the opera’s extreme opposites. It features some of the highest and lowest notes in opera, day and night, simple hummable melodies and complicated forward-looking music. The opera’s central theme concerns balancing these extremes to achieve perfect harmony. To reflect this, the final chord in the opening restores musical order.

It returns to the triumphant E-flat major, the same chord it started with but inverted, meaning Mozart moved the bottom note to the top. Although it retains its original harmony, the chord sounds higher, pointing towards enlightenment. That’s similar to Tamino, who in passing his trials restores balance to the kingdom while growing stronger, wiser, and more complete.

Who Invented Karaoke? American, Japanese or Filipino?
How Does Guitar Works?
What Is Squillo In Classical Singing?
Music Is A Language Too
Why Do Birds Sing?
Mysteries About Basic Cognition Of A Song
Music And Creativity In Ancient Times
Type Of Rhythm That You Can See
Extreme Noise Can Damage Our Ear?
How Does Music Works?
Menu