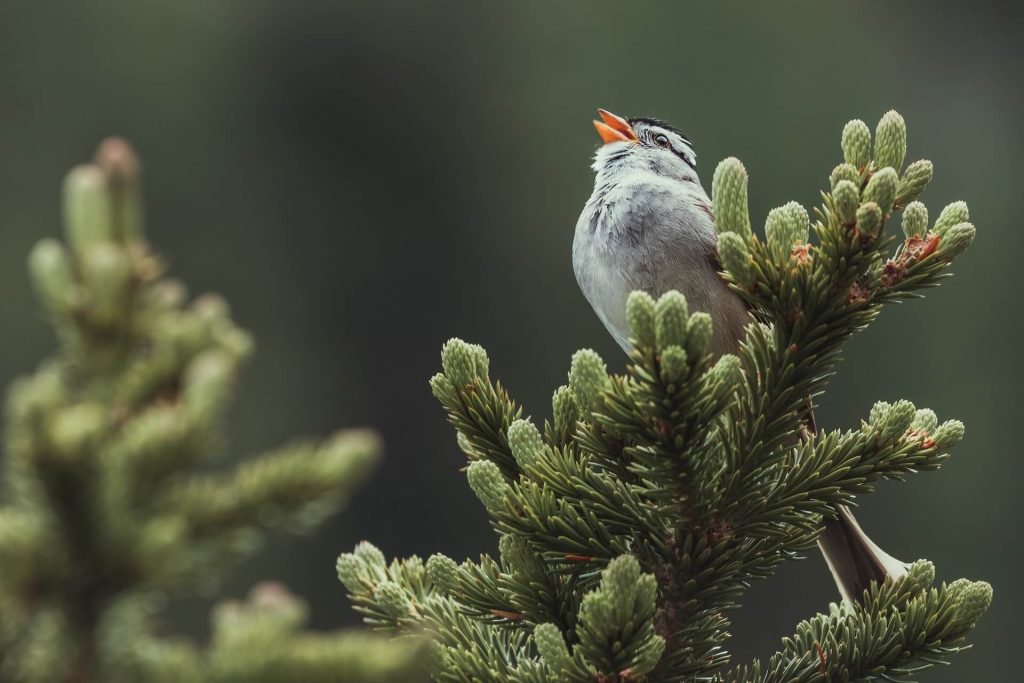 Why Do Birds Sing?

A wood thrush can sing two pitches at once. A mockingbird can match the sounds around it, including car alarms. And the Australian superb lyrebird has an incredible, elaborate song and dance ritual.

These are just a few of the 4,000 species of songbirds. Most birds produce short, simple calls, but songbirds also have a repertoire of complex vocal patterns that help them attract mates, defend territory, and strengthen their social bonds.

Each songbird species has its own distinct song patterns, some with characteristic regional dialects. Experienced listeners can even distinguish individual birds by their unique songs.

So how do birds learn these songs in the first place?

How do they know to mimic the songs of their own species?

Are they born knowing how to sing?

A lot of what scientists know about bird song comes from studying zebra finches. A baby male zebra finch typically learns to sing from its father or other males, starting while it’s still a fledgling in the nest.

First comes a sensory learning phase, when the baby finch hears the songs sung around it and commits them to memory. The bird starts to vocalize
during the motor learning phase, practicing until it can match the song it memorized.

As the bird learns, hearing the tutor’s song over and over again is helpful—
up to a point.

If he hears it too many times, the imitation degrades—

and the source matters.

If the song is played through a loudspeaker, he can’t pick it up as easily. But hide the same loudspeaker inside a toy painted to look like a zebra finch, and his learning improves.

What if the baby never hears another zebra finch’s song?

Interestingly enough, it’ll sing anyway. Isolated finches still produce what are called innate or isolate songs. A specific tune might be taught, but the instinct to sing seems to be hardwired into a songbird’s brain.

Innate songs sound different from the “cultured” songs learned from other finches—at first. If isolated zebra finches start a new colony, the young birds pick up the isolate song from their parents. But the song changes from generation to generation.

And after a few iterations, the melody actually starts to resemble the cultured songs sung by zebra finches in the wild. Something about the learning process must be hardwired, too, drawing the birds towards the same song patterns again and again. This means that basic information about the zebra finch song must be stored somewhere in its genome, imprinted there by millions of years of evolution.

At first, this might seem odd, as we usually think of genetic code as a source of biochemical or physical traits, not something like a behavior or action. But the two aren’t fundamentally different; we can connect genomes to behavior through brain circuitry.

The connection is noisy and quite complex. It doesn’t simply map single genes
to single behaviors, but it exists. Genomes contain codes for proteins that guide brain development, such as molecules that guide the pathways of developing axons, shaping distinct circuits. Birds’ brains have so-called “song circuits” that are active when the birds sing. These circuits also respond to the song
of a bird’s own species more strongly than to other species’ songs.

So the theory is that a bird’s genes guide development of brain circuits that relate to singing and the ability to learn songs.

Then, exposure to songs shapes those neural circuits to produce the songs that are typical to that species. Genetically encoded or innate behaviors aren’t unique to songbirds. They’re widespread in the animal kingdom. Spectacular examples include the long-distance migrations of monarch butterflies and salmon.

So what does this mean for humans?

Are we also born with innate information written into our genomes that helps shape our neural circuits, and ultimately results in something we know?

Could there be some knowledge that is unique and intrinsic to humans as a species?

What do you think about the birds singing?

Who Invented Karaoke? American, Japanese or Filipino?
Mozart’s Magical Flute
How Does Guitar Works?
What Is Squillo In Classical Singing?
Music Is A Language Too
Mysteries About Basic Cognition Of A Song
Music And Creativity In Ancient Times
Type Of Rhythm That You Can See
Extreme Noise Can Damage Our Ear?
How Does Music Works?
Menu